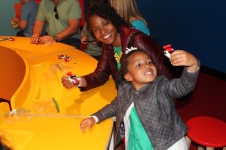 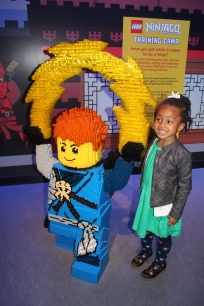 Most people will agree that the basis of a good relationship is a solid foundation. I found that the same applies when constructing a masterpiece out of Legos. With frustration, my daughter wearily informed me, “My dome won’t stay together!” You need to add it to a platform or put Lego blocks underneath so that it’ll stay together, Quinn,” I coached her. Then I saw her experience an “aha moment” as she smiled and continued with ease.

For one of our Mother’s Day activities, we went to Legoland for the very first time and had a blast for just $19 a piece, which is the online fee, $5 cheaper than purchasing the admission at the door.

“Look, Mommy! She’s made out of Legos!” my four year old exclaimed as she stood next to a Lego girl who was taller than she is. There were many replicas of Philadelphia landmarks, such as the downtown skyscraper buildings, the Art Museum, Citizen’s Bank Park Stadium and even the Broad Street Orange Line Subway. What made it even more fun is that many of the displays were interactive where Quinn, along with her Nana, father and I could press buttons and watch the little Lego figures move throughout the Lego city.

Even though there were many children and adults at the facility, there were several Lego stations to accommodate the crowds of people and plenty stools for children and adults to spend some time working on their Lego masterpieces. We even watched 4D Lego movies where we experienced, thunder, lightening, rain and even a little snow and did a workshop where we all learned how to make a Lego car. (We decided to purchase it for just $3.18)

There was a massive pirate ship where the children could climb, bounce and slide and even a ninja game, similar to mission impossible with beams, where they could see how agile and flexible they are. We even did the Lego interactive ride game and spent some time in the Lego shop where many of the items were reasonably priced.  There were even some stations we just didn’t get to even though we were there for nearly three hours.

Being at Legoland reminded me of how much I loved building with Legos when I was younger, and I found myself concentrating just as hard as my daughter was as she, my mom and I worked on our constructions. If you’re looking for a fun activity for the entire family and are near the Plymouth Meeting, PA area, I highly recommend paying a visit to Legoland! They offer annual passes, and I’m considering getting them because my daughter is already asking when we can go back.