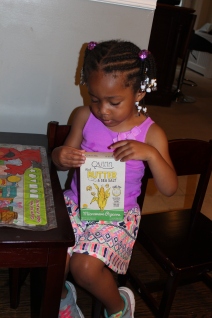 Years before my daughter was born, my husband and I knew her name. I’m one of those people who believes that we often are allegorical representations of our names, and I wanted our child to have a name that empowers her and demonstrates her abilities. Quinn means intelligent, and Victoria means victorious. Though it is 2016, we purposely selected a gender neutral first name where she will be recognized for her intelligence as a person rather than people focusing on her being a smart or capable in her abilities for a “girl.”

Surprisingly, when we went shopping the other day we stumbled upon one of my favorite childhood and adult treats with her name: Quinn’s Real Butter & Sea Salt Microwave Popcorn! Not only did it have her name, but a mother started the “Quinn’s Snacks” company on behalf of her son, Quinn, because she wanted more healthier options for him. This popcorn is made with no chemical coatings, basic Non-GMO ingredients, Butter that’s rBGH-free and real butter instead of butter flavoring, and actually taste good too. I’m looking forward to us trying out some of the other snacks.
While I initially selected Quinn’s name to represent her intelligence, I think it is so awesome that it now represents a brand that makes healthy options for children and adults that has received many accolades and positive reviews for clean packaged, Non-GMO foods.  Also, it’s terrific that the company includes my favorite treat because Quinn certainly is one of my favorite people.
All the best,
Tanya (Allegorical Name: Fairy Queen)