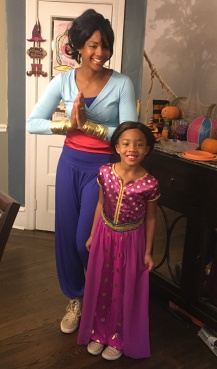 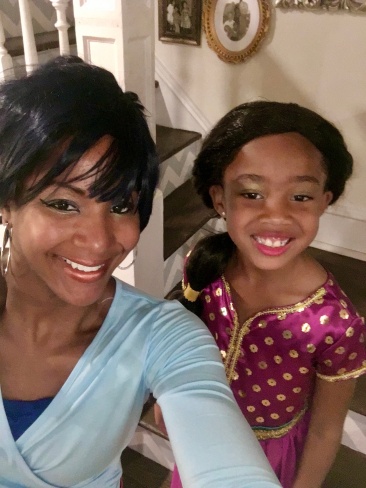 For the past five years, my daughter and I’ve been dressing up for Halloween in “matching” costumes. When Quinn was two, she was Doc McStuffins, and I was Lambie. At three, she was an astronaut, and I was her rocket. At four, she was Snow White, and I was the Evil Queen. Just last year, she was a magical fairy princess, and I was a magical princess mermaid.

This year, we decided on two costumes. The first one, that we wore at Sesame Place and Boot at the Zoo, was dressing up like her American Girl doll, Luciana, which was a lot of fun. Our second set of costumes were inspired by the Aladdin movie. Quinn dressed as Princess Jasmine donning a beautiful fuchsia outfit we purchased at Target in the kids clothing section back in May, not the Halloween costume section, along with a long flowing ponytail with gold clips that we got from Amazon for $19.99. For her footwear, she already had a pair of gold sneakers for comfort.

At first I was going to be Princess Jasmine’s mother, but then Quinn suggested that I dress up as the genie, which I thought was a fantastic idea. Though it was tricky finding the costume, since the genie is a male character, I was able to locate one from Amazon that I really liked. It looked good on me, but was very thin.

So I decided to use my creativity and piece together my own costume. I ordered royal blue harem pants from Amazon for $15.99. They are actually good quality and have a comfortable fit. The light blue wrap shirt also came from Amazon for $15.99 as well, and it is nice enough to wear regular, not just for a costume. Since it is a little thin for this time of the year, I paired it with a royal blue tank top I already had to wear underneath. For the gold wrist cuffs and red satin sash, I actually purchase fabric from Joanne Fabrics and got to work using my sewing machine. Believe or not, it took my less than a half hour to do both. Then, I topped it off with a dark blue ponytail wig I also purchased from Amazon for $22.99 since I figured it would be a bit too much to paint my face and body blue. I actually like the way it looks and find it to be good quality and not like the wigs one might find at a local Halloween or party shop. I can see myself using it for other events in the future.

Having “matching” costumes with my daughter is something we both look forward to and makes one of my wishes come true. It strengthens our mother/daughter bond and puts smiles on both of our faces as we have a great time together. Though Halloween won’t be here for a few days, we’re already looking forward to what we’ll be for next year.