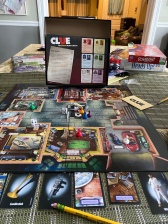 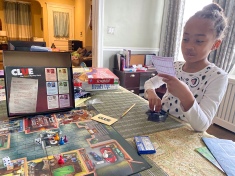 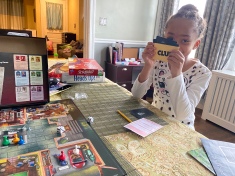 “It was Scarlet with the lead pipe in the garage,” my daughter asserted. We both love playing games. I especially enjoy how it not only gives us quality time together but improves not just her critical thinking but mine too.

Clue was one of my favorite games to play with my sister when I was younger. While I was eager to introduce it to Quinn, I was a bit apprehensive because of the premise of the game: find out who committed the murder, with what and where? According to the box, it’s for ages eight and up, but after giving it some thought and discussing it with my six year old, we determined that she could handle it without the game being too much for her. Boy, was I right!

Though there were newly added rooms, and I had to relearn some of the basic rules, it took Quinn no time to catch on to the concept of Clue. She strategically went to the different rooms to cross off what places the murder didn’t happen, and paid close attention as her dad and I did the same so that she could rule out suspects.

As I determined what cards were in the clue envelope and eagerly awaited my turn, Quinn solved the crime! I was always amazed at how “clued” in she was. A part of me was pleasantly surprised, but then again, she’s always been good at critical thinking. Some people think children are too young to understand certain concepts or lack basic critical thinking skills, but oftentimes it is us adults who are clueless for doubting or underestimating the abilities of children. Time and time again, Quinn reminds me of how adults can learn so many lessons from children.