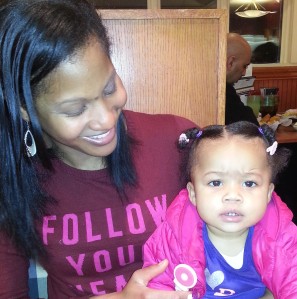 Imagine purchasing a brand new car: a beautiful, shiny, sweet ride.  How upset would you be if you saw a scratch on your prized possession shortly after purchasing it?  Now imagine that this was not a car but your beautiful, brand new baby with her first major scratch on that sweet face of hers. This is what I endured last week with my eight month old.  She’s had tiny scratches before as a result of her fingernails growing so quickly and has even given her father and me some good scratches. But this was the first time she had a scratch about an inch and a half long, on her face no less, and I can’t figure out where it came from.

I noticed a faint mark above her eyebrow that did not quite look like a fingernail scratch when she woke up from her nap, and it worsened as the day progressed.  As it worsened, so did my guilt. I felt like a negligent mom and then thought about how daycare workers must feel when a scratch or mark seems to have “appeared from out of the blue” on a child, especially a child who is unable to explain what happened. Was I not keeping a close enough eye on Quinn?  My husband tried to reassure me that I am doing a good job, but my anxiety got so bad that I was ashamed and nervous to visit my mother fearing that she would be upset and admonish me for not knowing what happened to Quinn. When my mom saw Quinn, my heart began to race; what was she going to say?  “Oh, I see Quinn got a little scratch. It’ll heal before you know it. This is the first of many more little bumps and bruises. Just keep an eye out for her. She’s a real mover!” That’s all she said. She didn’t pick Quinn up and hold her tightly saying, “What did you let happen to my grand baby?” She didn’t question my abilities as a parent.  Though I certainly will be even more attentive with Quinn now that she’s crawling and pulling up to a standing position every chance she gets, my mom’s words made me feel much better about not solving the mystery of Quinn’s scratch. Now, less than one week later, it is barely noticeable.

I’m sure I am not the only parent who has experienced this and will not be the last, but I felt the need to share my experience with others and say, “Please don’t be too hard on yourself if…no when your little one gets that first major scratch.”

2 thoughts on “Baby Your Scratch Left Me Itching for Answers”